Let's talk all about German Coconut Macaroons. In Germany, we call them Kokosmakronen. They are light egg white cookies with coconut flavour. Kokosmakronen is popular all year round in Germany but especially at Christmas.

I am sharing this recipe with you because it is one of my favourite cookie recipes for using up egg whites. If you just made my recipe for German Butter Cookies, you may find yourself wondering what to do with the 5 or 6 leftover egg whites.

This is where the Coconut Macaroons come in. They are such a simple recipe to make that you cannot go wrong. You will love this these cookies, and your children will too.

Where do Coconut Macaroons come from?

Macaroons have a long history. They have developed from a recipe in the far east that first used to mix egg whites with rosewater (affiliate link). The name “Macaroon” is derived from the Italian word “Macaron.” The Italian meringue.

In the 19th century, there was an influx of coconut imported from India, and so coconut macaroons were born. Coconut Macaroons first were found in an American Cookbook in 1830. Here in Germany, it has established as a popular German Christmas Cookie. (Source Wikipedia)

All you need to make this recipe is 5 ingredients:

How to achieve the best Kokosmakronen

How to store Coconut Macaroons

In Germany we store coconut macaroons in cookie tins. They tend to dry out if you leave them too long so you can protect them even more by laying a sheet of foil on top.

They last a long time, but they may dry out if not careful.

What should I do if the Coconut Macaroons dry out?

You can put them in an airtight container. Cover them with a sheet of foil and place a moist paper towel on top. This should give them more moisture.

Can I freeze Coconut Macaroons?

Yes they freeze well. Just take them out of the freeze one hour before you intend to eat them. 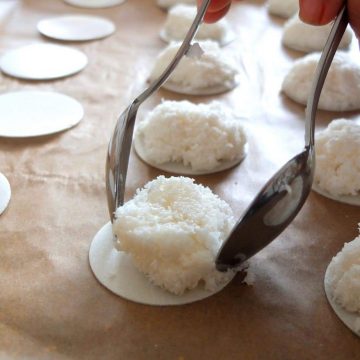