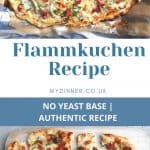 I am long overdue posting a Flammkuchen recipe – a German-French dish that has grown in popularity in recent years. Crispy, creamy and moreish this pizza-like dish is always a welcome treat. Sometimes the original recipe gets a bit forgotten as there are so many varieties today. This recipe is so versatile, that there are no limits to the number of flammkuchen versions you can create.

Flammkuchen is also called “Flambée or Flammekueche”. Translated to English it means "Flame Cake". It is a French-German flatbread that is topped with sour cream, creme fraiche, onions and bacon. It is sometimes referred to as German pizza. You can find it in German supermarkets in the frozen section with the traditional pizzas. But nothing compares to homemade flammkuchen.

Where does the Flammkuchen recipe originate from?

It originated from the Alsace area (Elsass) by the French-German border. Some argue whether it is a French or German dish, as the region changed borders in the last 150 years. However, everyone agrees it is Alsatian and delicious.

The recipe is very old and was invented in Alsatian farmhouses. At the time they used to make bread in wood-burning ovens. They would roll out a piece of dough very thin and place it on the hot stone. If the base became crisp the temperature was right for the bread. In time crème Fraiche, onions and bacon were added, and so the Flammkuchen recipe was born.

At first, flammkuchen was a dish you would make only at home. With the growing popularity of Italian pizza in the 1960s, flammkuchen started to appear in restaurants and markets all over Germany.  [source: Wikipedia]

How to make Flammkuchen?

This is a traditional Alsatian flammkuchen recipe (Elsässer Flammkuchen or Flammenkuchen Elsässer Art in German). One thing to remember about flammkuchen is that it loves to be baked hot. In traditional stone ovens, they used to be baked at 300 to 400 degrees. For a home cook, like you and me, it is sufficient to turn to oven to its highest settings at 220-50 degrees celcius.

How to make the Flammkuchen base?

This flammkuchen base is made without yeast.  The ingredients for the base are oil, water, salt and flour, simply mixed together in a bowl. Knead the dough thoroughly. The key is to roll out the dough very thin. This is not an easy task, as it might shrink back together, but persist. Flammkuchen does not have to be round like pizza. It is often rectangular (like the shape of the baking tray) or oval.

How to prepare the Flammkuchen Toppings?

The traditional toppings for Elsässer Flammkuchen (Alsatian Flammenkuchen) is:

Slice the onions very fine. The bacon is cubed, and the crème fraiche is mixed together with the sour crème and seasoned with salt and pepper.

One tip I have learned is to soak the onions in water. Then steam them lightly in the microwave for one minute to soften them. This can prevent the onions from crisping too much in the high heat.

Bake the flammkuchen at around 220-250 degrees Celcius (428°F) for around 15-20 minutes. Watch it so it does not burn too much. However, it is common to find some chargrilled corners on our Flammkuchen. (see images)

There is no definite sign when the flammkuchen is ready. When the edges turn crisp and golden brown, remove the bread from the oven and check if the middle is done well.

Tips and Tricks for the BEST Flammkuchen

In Germany Flammkuchen is very popular and there are many variations to the traditional recipe. Here are some suggestions for you:

How to serve Flammkuchen?

Flammkuchen is served traditionally on a prewarmed wooden board. It is traditional to drink a light white wine from the Alsace Area.

How to store Flammkuchen

Flammkuchen is best eaten the same day it is cooked. However, it also tastes good cold. Just store it in an airtight container and consume it within 3 days. 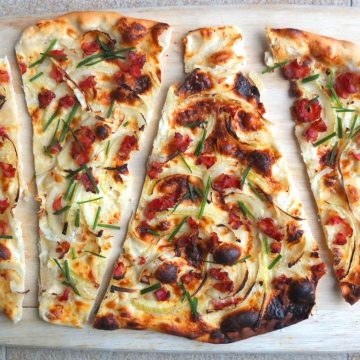