This sweet yeast cake (bread) recipe makes a beautiful, soft, lightly sweetened and buttery treat. Inside one of those yeast balls is a king hiding. Will you be the lucky one to find him and get to wear the crown all day?

This cake reminds me of my childhood. I did not spend the 6th of January in Germany where I lived. We always drove to Switzerland to ski after Christmas. There my parents would buy one of these yeast cakes. Germany has its own three king cake, but today we are going to discuss the Suisse recipe.

What is the three kings cake tradition?

The three king cake celebrates Epiphany. The tradition started in the 16th century when a dried bean was baked into a cake. The lucky one who found the bean was crowned "bean-king" for the day. Apart from Switzerland, Germany, Spain, Greece, France, Portugal, Mexico and US Louisiana have their own three king cake recipe and tradition.

According to the Cambridge Dictionary: Epiphany is a Christian holy day in January (traditionally 6th January in Western Christianity) that celebrates the revelation of the baby Jesus to the world. This is when the three holy kings arrive to meet baby Jesus. A star over Bethlehem, the birthplace of Jesus, guided them the way.

How to make three kings cake?

This is an easy three king cake recipe. The only aspect to be aware of is that you allow the dough enough time to rise before baking.

6. Once the dough has risen, separate 8 equal portions from the dough and form them into little balls. They should be around 80 gr each. In one of the balls hide a plastic king / or if not available a dried bean.

7. Form the remaining dough into a big ball. Line a baking tray with parchment. Place the large bowl in the middle and attach the small balls around in flower shape. With a pastry brush (affiliate link) cover the cake in egg wash. Sprinkle with almonds.

Bake for around 30 minutes and then leave the cool.

How to serve three king cake

Serve this cake with some butter and jam. You each take it in turns to remove one of the balls (your cake slice) from the cake.  The winner will find the king/bean hidden inside. He is king for the day and allowed to wear the crown.

In Germany, you can buy the crown and plastic king. However, it is not very sustainable (although we reuse ours every year) Create a paper crown and use a bean (like in the middle ages) instead. Children will still love this custom.

This cake tastes best if you eat it the same day it is baked. If there are any leftovers, store in an airtight container. You can toast a cake slice the next morning for breakfast.

This popular Swiss custom was almost forgotten. It only got rediscovered in 1950 by Swiss bread researcher Max Währen.

Today you can find this cake at most supermarkets around the start of the year. It is estimated that around 1.5 million cakes are sold annually and the trend is increasing. [Wikipedia] 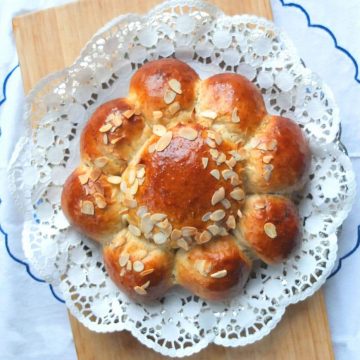