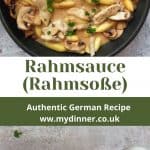 There are few sauces that are as versatile as this Rahmsauce (Rahmsoße). It goes well with
everything from turkey schnitzel, frikadellen (German meatballs), pasta, spätzle and rice. In Germany, this creamy sauce is one of the most popular and well-known sauces. It is also the base for the famous Jager sauce.

Nowadays people tend to use instant packet mixes such as the Knorr Rahm sauce. They don’t realise that the homemade recipe for rahmsauce is quick and easy to follow and consists of mainly pantry ingredients. Also, homemade sauces are free of preservatives and don’t have the carbon footprint that imported goods bring with them.

Rahm Sauce (in German also referred to as Rahmsoße) is a cream-based sauce. It is one of the basic German sauces. Rahm sauce in English could be translated as “Cream Sauce”. Colloquially you can call it German brown gravy. Although the sauce may appear to be paler.
The technical term for this sauce in French is “Sauce à la crème”.

The name is put together by two words. "Rahm" is a word for cream in German. "Sauce" has the same meaning as in English. Another word for Sauce in German is "Soße". So another common name for this sauce is "Rahmsoße".

Whats in Rahmsauce?- The Ingredients:

How to make Vegan Rahmsauce

This sauce is easily adapted for a vegan diet.

TIPS for the best Rahmsauce

Sometimes you can follow instructions to a tee but something still goes wrong. Here are some
suggestions on how to remedy your sauce.

This sauce is very versatile. Here are some suggestions on what to have with it:

How long does Rahm sauce keep?

Store your Rahmsoße in the fridge and consume within 1-3 days.

Can I freeze this sauce?

I would advise against freezing rahmsauce, as the cream is likely to separate when thawing.

Did you try this recipe? 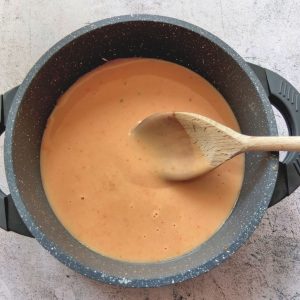