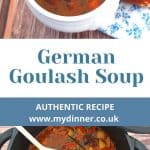 Old-fashioned German goulash soup reminds me of warmth and wholesomeness. Although this beef stew is an import from Hungary, this soup is deeply ingrained in German food culture. What is there not to love about it? It is easy to make, it is a real crowd pleaser and best of all..... it makes your kitchen smell delicious!

I am full of anticipation when a pot of goulash stew is bubbling on the stove. A super simple, yet delicious recipe I cannot wait to share with you.

History of Goulash Soup and its arrival into German Kitchen

Goulash is an old dish that is believed to have its origins in ancient nomadic times. Hungary made it its own when they started cultivating the freshly discovered paprika, as a cheap alternative to pepper.

At first, it was known as a dish for the poor but it quickly gained popularity as goulash soup is nutritious, cheap to produce and great to take on travels with you. Goulash soup only arrived in Germany at the end of the 19th century. It has established itself as a military dish. In the first world war, the “Gulaschkanone” (Goulash cannon) was created. [source Wikipedia]

The Gulaschkanone is put together by two German words. “Gulasch” (goulash) and Kanone “cannon”. The name derived from the device looking similar to a piece of artillery machinery.  A Goulashkanone is a mobile stove for the military field kitchen. It was invented during the first world war and used to be pulled by horses to front lines or feed civilians during wartime. This provided warm meals on the go.

Not only goulash was served in the “Goulashcannon”, but also Pea Soup or Potato Soup. The gulaschkanone is still in use today. Today the Red Cross or Fire brigade have a modern version to enable to feed people in need. You can also buy them on amazon.de for personal use,

About this German Goulash Recipe

Still, goulash soup is immensely popular in Germany and has been part of German food culture for more than a hundred years.

The authentic goulash soup is made with stewing beef which is just called “Gulaschfleisch” in Germany. The dominant flavour in the soup is paprika. It, however, has the iconic German sweet and sour flavouring that is a result between the combination of red wine, sugar and paprika.

How to make German Goulash soup

What to serve with goulash soup?

Goulash soup goes very well with bread, whether it is a nice crusty roll, rye bread or a pretzel. A popular side dish at parties is some freshly baked garlic bread with your goulash soup.

If you want you can serve the soup with a side salad, such as this cucumber and radish salad. Some enjoy drinking a cold German beer while eating their steaming hot soup.

Tips for the BEST goulash soup

Why not have a Goulash Party?

Goulash soup is a great dish to make when having to feed a large group of people. It is easy to make in advance and it tastes even better warmed up.

In recent years it has become a favourite dish for new year’s eve parties. In Germany at midnight, everybody leaves the house to let off fireworks. Your guests will love you for offering a warm soup, after coming back in from the cold.

When planning a goulash party factor in around 150 g (5 oz) of meat per person as a rough measurement.

How to store goulash soup

Goulash Soup is the perfect dish to make in advance and is one of those dishes which tastes even better the next day warmed up.

You can keep your goulash soup in an airtight contender in the fridge for up to 4-5 days. It freezes well, up to three months. 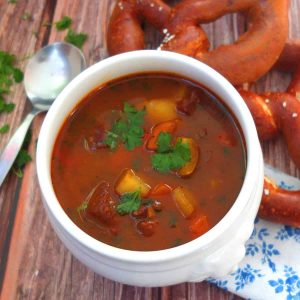