Behold! Warming, filling and healthy swede and carrot soup.  This vegan soup recipe will absolutely satisfy your craving for warmth and nurture.

About this Swede and Carrot Soup recipe:

This is a modern take on the traditional “Steckrübeneintopf”(swede stew). “Steckrübe” is the German word for Swede. Traditionally made with common potatoes, I have substituted them in with sweet potatoes. You would serve this soup with meat. However I wanted to keep it simple and healthy, so this is a vegan version.

This recipe makes a large pot of soup. Fit to feed about 6 to 8 people. So, if there are not too many of you, consider halving the recipe ingredients or be prepared to freeze a batch for another day.

How to make swede and carrot soup

Tips for the BEST Swede and Carrot Soup

History of Swede in German Cooking

Swede has a bad reputation as being known as the food for the poor. In Germany it reminds people of post-war famine. Swedes that were originally produced as pig food, were repurposed in recipes after a bad potato harvest in 1916. In post World War One cookbooks written in 1917, you can find recipes for swede jams, soups and even swede coffee. They tried to make it more appetizing, by calling it “East-Prussian Pineapple” or “„Mecklenburgische Pineapple.“ Needless to say that you would be able to chase people with swede after that. [Source Wikipedia] 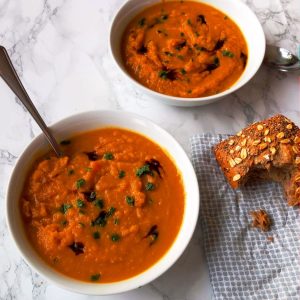