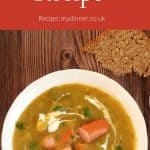 The classic, old fashioned German Potato Soup (Katoffelsuppe). A modest soup with undemanding and frugal ingredients. And yet it is so full of flavour, bursting with nutrients and one of the most popular soups in Germany. Let me share with you my easy recipe, so you can make it at home.

If you have grown up in Germany, you probably have a different recipe of homemade potato soup in mind. There are so many of them and every family has their unique version. (This post was first published in January 2014 and updated in January 20201)

What is authentic German potato soup?

There is no such thing as the one original recipe for German potato soup. There are hundreds of versions available and history has moulded them to their current state. (see below some regional variations)

They are chunky or smooth and creamy, vegetarian or loaded with meat. However, there are some common ingredients that you find in German soups.

How to make German Potato soup?

Which sausages to use with German Potato Soup?

Let’s get to the all-important sausages. Which one to choose? There are so many! It all depends on our personal taste. Here are some suggestions:

How to serve German Potato Soup?

This soup can be served both a starter or main course. Serve this potato soup with a fresh piece of rye bread or a Brötchen (bread roll). A baguette is also a popular option.

Can I freeze German potato soup?

Yes, this soup freezes well, as long as you have not added any cream to the soup. Cream does not thaw very well. Freeze it in an airtight container for up to three months. It is a great recipe to make ahead and freeze in portions.

How long does this soup keep in the fridge?

This potato soup keeps in the fridge for up to 5 days. Store in an airtight container and reheat thoroughly before serving. 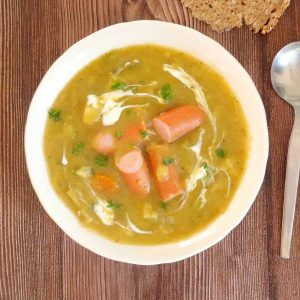 Sausages - at least 1 per person

If using Frankfurter or Smoked Sausages