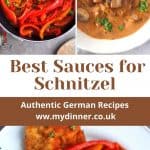 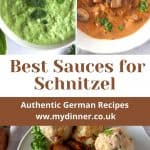 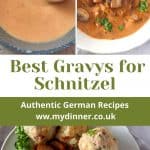 Schnitzel is the term for a dish in Germany, where the meat is tenderised. A schnitzel does not always need to be breaded to be a schnitzel. Unbreaded Schnitzel are referred to as "Schnitzel Natur". German schnitzel is generally made from 4 types of meat.

Pork Schnitzel is the most common variety in Germany. Veal is the most expensive cut of meat, and made famous through the Wiener Schnitzel. Turkey and Chicken schnitzel are healthy alternatives and very popular with home cooks.

The famous mushroom sauce for schnitzel. It turns every ordinary schnitzel into a Jäger Schnitzel. Jäger means "Hunter" in German. Hunters used to collect mushrooms on their way home from a hunt, and the cooks would make this mushroom gravy to go with the caught meat.

There are many variations of this sauce. Some recipes use white or red wine. Generally, the ingredients include cream, stock, mushrooms and onions.

You do not have to serve this mushroom gravy only with schnitzel. It also tastes very good with spätzle, pasta or semmelknödel (Bread dumplings)

Get the Jager Sauce Recipe

Zigeuner Sauce is a spricy, tangy paprika sauce for schnitzel. The term "Zigeuner" is the German word for Gypsy. In recent years the name of the sauce has been controversial. and the sauce has been renamed "Hungarian Style Paprika Sauce". The sauce is simple and consists mainly of chunky cut peppers, onion, pickled gherkins (affiliate link) and tomato sauce.

Schnitzel served with this sauce are called "Zigeunerschnitzel".

Get the Zigeuner Sauce Recipe

Rahmsauce is a cream sauce for schnitzel. Based on a sauce made from a simple roux, stock and cream, it has a lovely subtle taste. Rahm is the German word for cream. Schnitzel with rahmsauce is called Rahmschnitzel. This sauce is also very popular to have with frikadellen or spätzle.

The sauce has a roux as a base and is made with meat stock /broth and cream.

Get the recipe for Rahmsauce

Grüne Soße with Schnitzel is called Frankfurt Schnitzel. It makes a welcome change to other cream sauces.

Get the recipe for Frankfurt Green Sauce

Some argue that a well-cooked schnitzel does not need any sauce. Especially if you are using a delicate meat such as veal. A slice of lemon adds a fresh taste to the meat and helps break out the fat.

There is also a historical reason for serving schnitzel with lemon juice, as the sour taste helped to mask the taste of rancid meat, in a time before refrigeration was not as common.

What Other Side Dishes go with Schnitzel

Did you try one of these recipes?

Zigeuner Sauce (Gypsy Sauce)
A delicious spicy sauce made from peppers and tomatoes. Great for schnitzel, to make the iconic Zigeunerchnitzel, or pair with beef or sausages.
Check out this recipe

Rahmsauce – German Cream Sauce
This creamy sauce is perfect for schnitzel, meatballs, chicken, pasta and spaetzle.
Check out this recipe

Frankfurt Green Sauce (Frankfurter Grüne Soße)
Try this world-famous German herb sauce. Refreshing, delicious and yet so simple, these are the characteristics of the original Frankfurter Grie Soß (as Frankfurt green sauce is colloquially known).
Check out this recipe