Travel » What and Where We Ate in St. Ives, Cornwall

As you know my husband and I LOOOOVE traveling. It's our second passion after... eating! Thank goodness the two are so compatible!

This year, for the second British May Bank Holiday, we took the train from London for 6 hours to the lovely St. Ives. We are very lucky that my husband's father and his wife moved there last year and invited us to stay.

St. Ives is a little seaside town in Cornwall. It developed as a seaside resort, after the arrival of the railway in at the end of the 19th century. St. Ives gained some significance in the early 20th century when modernist artist such as Barbara Hepburn settled here and started an artist colony.

Of course the first dish I had to try was the famous Cornish Pasty. Cornish Pasty's are the national dish in Cornwall. The original recipe is protected and was spread around the world through the migration of Cornish miners.

For the evening our hosts took us out to one of his favorite restaurant. Scarlet Wines at Carbis Bay, (near to St.Ives) acts both as a wine shop and a restaurant. For starters I choose some black pudding croquettes. I had never tried croquettes like these before and they were delicious.

As a main course I choose some venison with celeriac rostie. Followed by a sorbet collection that was eaten so quickly that I did not have time to photograph it!

All in all we would really recommend this restaurant. The staff was super friendly and the restaurant had a wood burner, to warm us after exposure to the wind and the rain! 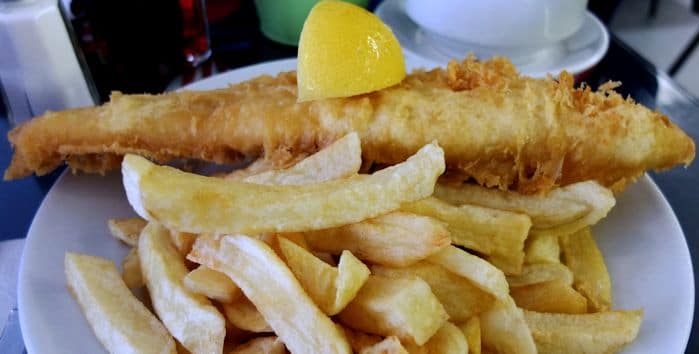 The next day we set of by foot to discover the wonder's of St. Ives. After some distraction at an arcade, and a little shopping spree, it was already time for lunch! My husband insisted that now we are near the sea, we had to have some fish and chips.

We found a restaurant near the the beach called the Kingfisher. We decided it had to be good because it was full of locals and we treated ourselves to some battered cod, chips and mushy peas.

This is me taking a break from sightseeing and enjoying the views from the Tate Modern St. Ives

After getting lost a few times we finally reached the famous Tate St. Ives Gallery. We were lucky to catch the 2pm tour which gave us some great insights into the art history. The building itself is impressive with great views over the beach.

Afterwards we had to try some traditional Cornish Cream Tea. These are traditionally eaten in the afternoon and consist of scones, Cornish clotted cream, jam and a cup of tea. They originate from Devon and Cornwall but now are eaten all over England.

We had our cream tea at

A little overpriced but it was next to the Tate, and it was raining heavily outside so we were not to complain.

For the evening we had a special treat. We went to a hotel at the sea front called Pedn Olva, where they seated us at a table with full view over the sea. I started off with a seafood medley consisted of crab, smoked salmon and salmon roe. 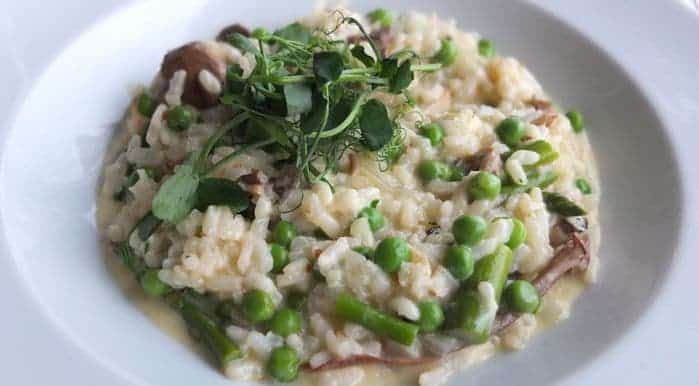 Next I chose the asparagus, mushroom and pea risotto which was heavenly creamy.

My highlight of the meal was this frozen cream cake, with caramel and shortbread. I cannot exactly recall what it was called but just thinking about made my mouth water.

The restaurant was a great place to finish of our culinary discovery of St. Ives, however I am sure we will be back to discover more.

We use cookies to ensure that we give you the best experience on our website. If you continue to use this site we will assume that you are happy with it.OkPrivacy policy