Toast Hawaii is a classic German open-faced sandwich. Delicious, down-to-earth and exotic all at the same time. It consists of a slice of toasted buttered bread, a slice of cooked or cured ham, and a ring of sliced pineapple, all topped with a slice of swiss cheese.

This dish is especially popular with children and some Germans even serve it as a German Christmas Food. Part of its charm is that you do not really need any culinary skills to get it right.

This Hawaiian Toast is a product of the German economic recovery (Wirtschaftwunder) in the 1950s. The TV cook Clemens Wilmenrod - who is the inventor or this pineapple ham sandwich - first unveiled his recipe on the 20th of February 1953 in his TV show. It was called "Within 10 minutes to the table". He was not a traditionally trained cook, which might explain the simplicity of this dish.

It was seen as the embodiment of "modern cooking" at the time, and started a quick trend from "Schnitzel Hawaii" to "Steak Hawaii" and "Salad Hawaii".

How to make Toast Hawaii

With what to serve this German Sandwich?

Serve Toast Hawaii as a quick snack or main course. It goes well with a green salad on the side. I would plan on two Hawaiian Toasts per person.

Other extras are up to your personal preference. Here are some examples:

Instead of using a conventional oven, you can also use

I would advise you to consume this open-faced sandwich as soon as you cooked it. If you store it too long, the pineapple could make the bread too soggy.

Did you try this recipe? 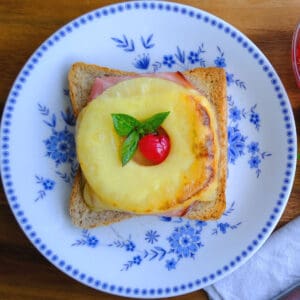