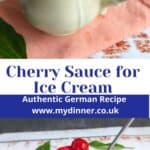 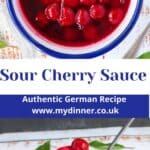 Cherry Compote is a simple, quick but delicious condiment that is perfect to use for a variety of dishes. In Germany, it is called "Kirschgrütze" - and served with German Waffles, Pfannkuchen (German Pancakes), Käsekuchen (Cheesecake) or simply by itself. Let me show you how we make this simple recipe.

Compote is a simple sauce whose main ingredients are fruit and sugar, usually cooked in its own juice. The compote additionally gets flavoured with vanilla sugar and thickened with corn starch.

What is Cherry Compote used for?

Cherry compote is generally used to complement another dish. You can simply mix it in with yoghurt or quark. In Germany, we like to eat it on waffles, rice pudding or pancakes.

It is also popular to serve it with sweet German dumplings such as Germknödel or Dampfnudeln.

Kirschgrütze or Heisse Kirschen in Germany

Cherry compote in Germany is called "Kirschgrütze". "Kirschen" is the German word for "cherries". It is related to the German berry dessert called "Rote Grütze". Here red berries are cooked with a very similar recipe to a dessert sauce.

It is so popular that you can buy it ready-made in the refrigerator section by companies such as Dr Oetker.

When the sauce is served warm it is referred to as "Heiße Kirschen". "Heiß" is the German word for "hot". So this is literally translated as "hot cherries".

What cherries to use for compote?

Ideally, you would use fresh cherries for compote. However, if you are not one of the lucky ones who has a cherry tree in their garden, you will find that they are often very expensive in supermarkets (or at least in Germany they are).

This is because cherries are time-intensive to harvest. Cherries are a short-season crop, which drives up prices as people know they will not be in season for long.

A good alternative and this is very commonly used in Germany, is jarred cherries. Also, frozen cherries work well.

The variety that is most used in Germany are sour cherries (Sauerkirschen). They are also known as morello cherries.

Ingredients you will need

How to make Cherry Compote.

The cherry compote can be flavoured according to your preferences. Here are some ideas:

The compote should keep up to 2-3 days in the fridge. It may even last a bit longer, depending on how much sugar you used. 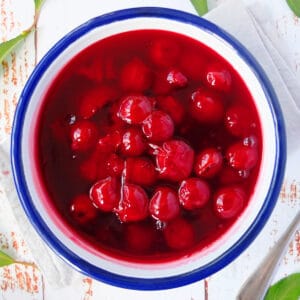