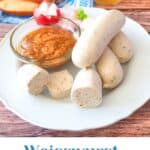 No other sausage is as typical for the Octoberfest as the Weisswurst, the famous Bavarian white sausage. They are delicious served warm with some sweet mustard (affiliate link) and a Bavarian pretzel on the side. A cool weißbier (Wheat beer) also compliments this traditional meal.

Let's have a look in detail at this famous Munich sausage, learn how to cook it and most importantly how to eat it the German way.

Weißwurst is a parboiled white German sausage made from veal, pork, bacon and spices. There are many several types of these sausages, but the most famous one is the Munich Weisswurst (Münchner Weißwurst).

According to popular legend, the Weisswurst was invented in 1857 by Bavarian pub owner Sepp Moser. He was preparing bratwurst (affiliate link) for his guests, but when he realised that he no longer had any sheep casings leftover, he decided to use pork casings, which are tighter and bigger. When he was frying them, the sausages kept on bursting, so he decided to boil them instead. His guests enjoyed them and this was the birth of the weisswurst.

It is more plausible that the sausage originated from France in the 14th century, where they had a boiled veal sausage called "boudin blanc" which also translates as white sausage. It is possible that the Huguenots brought these to Germany.

As an English speaker, you pronounce Weisswurst as "VICE-WURST". The C is pronounced sharp.

How to cook Weisswurst

Weisswurst is not cooked as such but gently heated up. The German white sausages that you get from the butchers are shops are usually already preboiled. It is important to note that Weisswurst is never is fried in the pan but warmed instead in a water bath.

To warm the sausages you simply place water with a teaspoon of salt in a large saucepan and bring to a boil. Now remove the saucepan from the heat, as it is important that the water is no longer boiling when you place the sausages inside, otherwise they might burst. The ideal temperature is about 70°C/158°F. There you leave them for about 10-12 minutes until warmed.

To serve weisswurst the Bavarian way place the sausages into a deep bowl with a little cooking water to keep them warm. Serve them with a pretzel, sweet mustard (affiliate link) and a glass of wheat beer.

Traditionally you serve this for breakfast. An old saying goes that you should eat it before the clock strikes 12. This stems from the time when the sausages were sold uncooked and refrigeration was not common. Nowadays people also serve it for dinner or a light lunch.

How to eat Weisswurst

The art of eating Weisswurst is a science in itself and there are different ways a German may go about it. Here are the most popular methods:

With Knife and Fork - the Banana Method

If you prefer eating with a knife and fork, you use can make a lengthwise incision into the sausage. With the fork, you can fold away and remove the casing.

Where to buy Weisswurst?

In Germany, you can find it in any supermarket and butcher. Abroad it may be more difficult. I have listed some places for you below:

This German sausage has a mild yet aromatic taste. You will taste the note of parsley, lemon and marcis. These spices complement the meaty flavour but do not overbear them.

What is the difference between Bratwurst and Weisswurst?

Weisswurst is a thick white sausage, whereas Bratwurst is longer and thinner. Where you grill brats on a BBQ, Weisswurst is simply warmed up in the water. Bratwurst tends to be served with spicy mustard, whereas Weisswurst is enjoyed with sweet German mustard.

Why is Weisswurst white?

This is because it is made partly from white veal meat. Also, the white salt used makes a difference in the colouring. Other sausages use nitrite salting which tends to colour the meat a reddish tone.

Can you eat the skin of Weisswurst?

Traditionally you would remove the skin of the sausage before eating. It is quite tough to chew. However, as long as the sausage uses natural casings, you can of course eat it without any danger.

Can you grill weisswurst?

Yes, there is no reason you cannot grill them. Although this is not the traditional way of eating them. The German celebrity cook Tim Mälzer divided his audience by turning Weisswurst into Currywurst.

Weisswürst which can may you buy preboiled from the butchers can be stored for up to a day in the refrigerator.

If you purchased your sausages vacuum-packed from a supermarket they will last longer. Please read the package instructions to be sure.

Can I freeze Weisswurst?

Yes, you can freeze this sausage without problems for up to three months. Defrost them either in the fridge or with cold water. 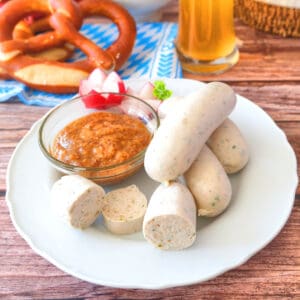 How to cook Weisswurst

How to eat Weisswurst

With Knife and Fork - the Banana Method

If you prefer eating with a knife and fork, you use can make a lengthwise incision into the sausage. With the fork, you can fold away and remove the casing.