I post so many Lebanese and German recipes, that often I forget my third favorite food! And that is Filipino! I probably cook filipino dishes a couple of times a month, (so not as often as German and Lebanese) but we enjoy their food no less. This recipes is one of my favorite dishes to gook with aubergines. It is quite flavorsome, filling and the perfect comfort food on a rainy Sunday.

When I think of stuffed aubergines, I always see the Mediterranean version stuffed with feta cheese, lamb mince and tomatoes. But this dish is very different. For starters, after you have boiled the aubergines, you flatten them so it resembles more a plaice fish than a round eggplant.

Before placing the aubergines in the oven they are topped with an egg mixture. (Filipinos love egg) Some versions of this recipes put so much egg on it that it resembles more an omlette than an aubergines, but I prefer this version.

This dish can be fried or baked, but I usually choose the baked version, as I do not want to eat too much oil. Also it is a lot less washing up to do this way 🙂 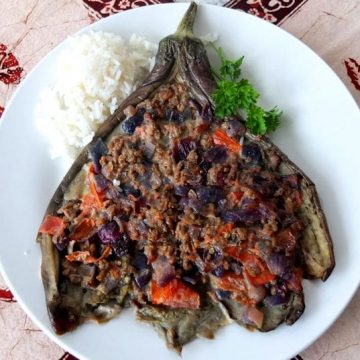 Tried this recipe?Let us know how it was!
« What and where we ate in Amsterdam
Roasted Banana Coconut Milk Ice Cream »